We can readily learn from others who have found success. There is a great deal of material to choose from and some is better than others. The philosophy of American basketball coach John Wooden stands out from the crowd. 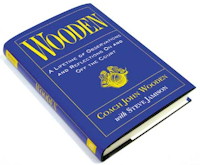 John Robert Wooden (October 14, 1910 – June 4, 2010) was one of the most revered American basketball coaches, loved by his players who included Kareem Abdul Jabbar and Bill Walton. Nicknamed the Wizard of Westwood, he won ten NCAA national championships in a 12-year period — including seven in a row — while at UCLA. This feat is unmatched by any other college basketball coach.Within this period his team won 88 consecutive games and Wooden was named national coach of the year six times.

Wooden was renowned for his short, basic, inspirational messages to his players, including his “Pyramid of Success”. These sayings were offered to show how to be a success in life as well as in basketball.

Wooden’s seven point creed may be the best example of this:

2) Make each day your masterpiece.

6) Build a shelter against a rainy day.

7) Pray for guidance and give thanks for your blessings every day.

There are several excellent books available both by, and about, this great coach and inspirational human being.

Your friend in health,
Adam aka Guru

This site uses Akismet to reduce spam. Learn how your comment data is processed.

How Do You Wake Up With Energy?
Finding Something Bigger than “You”…
8 Ways To Stop Sugar Addiction
5 Tips on How To Improve Digestion & Use Food for Energy
When you eat a meal do you get tired or energized?
You Must Make The Time To Meditate
How To Say Yes In A Different Language
#1 Way To Create Momentum
How do I lose belly fat “fast”?
How Successful People Dominate in Their Health and Wellness (Pt 1 of 5)

Create More Time, Energy, and Freedom To Do The Things You Love